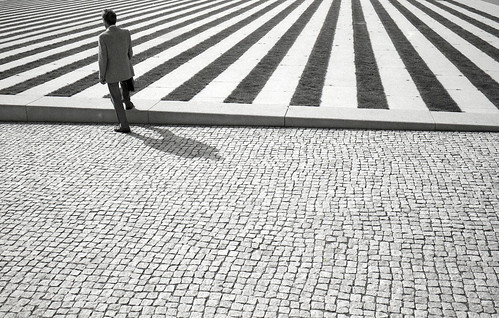 Picture the scene: you’re out on the sidewalk – maybe shopping, chatting or just daydreaming. Suddenly, you notice a shifty-looking bloke pointing a camera at you. What’s your reaction? Discomfort, embarrassment – anger?

Before you lose your temper, spare a thought for the person behind the camera. As a practitioner of the increasingly popular art of amateur street photography, I can assure you there’s every chance the photographer is feeling as embarrassed as you, and is just as uncomfortable with the idea of invading your privacy.

So why do we do it? Are we just voyeurs and stalkers out to spy and gawk? Well, no, but these assumptions mean we’re often in a precarious position. Perhaps our most compelling excuse is the chance to make something out of nothing, to preserve or even celebrate a fleeting moment that barely existed and yet contained something special – a look, a feeling or just a random assembly of shadows and shapes.

We talk about “taking” a photograph, but the process is nowhere near as one-sided as the word implies. There’s a crucial exchange between a photographer and the one-off moment they seek to capture. The moment was already happening and yet, at the same time, was also brought into existence by the photographer – it wasn’t fully there until it was recorded. It’s like taking a scalpel to the flow of the street and slicing off a fragment, which becomes something more than it was. There’s a kind of drama to the act.

City streets are a great place to take photographs. Even mediocre shots can capture something of the energy and romance of communal life. It’s no wonder that street photography is enjoying a renaissance. You may have noticed people pointing cameras at strangers in the street, or perhaps you’re tempted to try your own hand – either way, Thames & Hudson’s recent anthology Street Photography Now confirms its increasing popularity.

For those who yearn to make the leap from admiring other people’s photographs to photographing other people, street photography is the obvious starting point. But it presents a challenge: you only get one chance to capture each moment before it’s gone; there are no second takes. The advantage is that there are an infinite number of these moments.

Scratch
Scratch. Photograph: John Carvill/Flickr
Ironically, street photographers expose themselves to even more scrutiny than their subjects. They must, in the age of terrorism, keep a watchful eye on the watchful eye the police are keeping on them. They face a range of reactions and – as an armchair street photographer who has recently jettisoned the armchair – I’ve written a summary of the reactions I’ve encountered, and included a few tricks and tips.

Hostility
A negative reaction is what every nervous neophyte most expects and fears. I’ve never encountered a level of hostility that threatened to escalate into violence. I’ve been eye-balled by police officers, admonished by security guards and asked: “What the hell do you think you’re doing?” I’ve received countless dirty looks, plus the odd suggestion that I “fuck off, yeah?”. But even then, hostility can quickly fade and even transmute into friendly chat.

Hostility
Hostility. Photograph: John Carvill/Flickr
Resentment
This is often just an expression of self-consciousness. One way to counter it is to convince your subject that their natural instinct is correct – ie that nobody is interested in photographing them. So try this (which works more often than you might expect): pretend you weren’t really taking a picture of them at all. Subtly re-aim the camera and take (or pretend to) a couple of shots beside or beyond them.

iPod Girls
iPod girls. Photograph: John Carvill/Flickr
Act naturally. Don’t take just one shot of a subject and then lower the camera. The singularity of the act will mark it out as conspicuous. Instead, take (or appear to) any number of photos before and/or after the one you really want. Move through a crowd fluidly operating your camera, looking as unselfconscious as possible. As in many areas of life, looking and acting plausible can count for a lot. Several books recommend shooting from the hip, but this is hit-and-miss. A better method is to hold your camera between chest and eye height, and fire away in the general direction.

If you do get caught taking someone’s photo, you might as well make sure you’ve taken it. Don’t make the mistake of sheepishly lowering the camera before hitting the shutter button. Try to assume an air of indifference. If you’ve got professional-looking equipment (ie anything more sophisticated than a digital compact) a lot of people will assume you’re a news photographer. It’s also a good idea to say it’s for a college course. But if you tell them it’s a hobby, for some reason you’ll be met with a look of incredulity, roughly translated as: weirdo!

Tacit disapproval
Tacit disapproval. Photograph: John Carvill/Flickr
Disapproval
This is probably the most common non-positive reaction. Most of the time you can just brazen it out – smiling broadly, nodding affably, moving briskly but unhurriedly away.

Sometimes, people ask you to delete the photos. It’s probably best to avoid getting into a debate about who does or doesn’t have the right to demand that you delete a photo (answer: nobody). Unless you think you have captured something truly brilliant, though, it’s probably best to capitulate, if only for the sake of good photographic karma.

A foolproof method of getting round this is to use film. Since you can’t delete a photo from a film camera, no one can demand that you do.

Some fella
Some fella. Photograph: John Carvill/Flickr
Neutrality
Some people don’t react at all. This lies at the edge of what we could call the sweet spot of street photography. A young lady might give you a haughtily dismissive gaze, an older man may simply have seen too much of life to be perturbed by some whippersnapper with a camera.

But don’t overdo it: a neutral reaction doesn’t mean you’ve wandered into an outdoor annexe of Madame Tussauds. Have respect: take one or two shots, then move on.
Get a move on, son!
Get a move on, son! Photograph: John Carvill/Flickr
Obliviousness
This is the centre of the sweet spot. People on a busy street can be too distracted to notice much, giving a photographer free rein. Street fairs and carnivals are the ideal scenario – loads of different people to choose from and most of them in good spirits.

The Minx
The Minx. Photograph: John Carvill/Flickr
Others are too wrapped up in their own thoughts to notice someone standing right beside them, clicking away. These rare moments of total unselfconsciousness are there to be captured … if you can summon the nerve.

Indulgence
Indulgent people are not oblivious, they’re just curious or mildly amused. They give the street photographer a restorative dose of complicity. One knowingly indulgent smile from a stranger can counteract an entire day of wet clothes, aching feet and missed opportunities.

I see you!
I see you! Photograph: John Carvill/Flickr
Posing
When taking street shots, sometimes you find people happily posing for you; other times, you might explicitly ask someone if they mind posing for a shot. In either case, the danger is that they instinctively lapse into their standard having-my-picture-taken pose, one which is often unflattering and seldom interesting. You can counteract this by pretending you’re not ready, or having problems with the camera, then quickly firing off a shot. Some people have such interesting faces that posing doesn’t matter; others are so relaxed or eccentric that even when posing they are incapable of being boring.

Here’s to you!
Here’s to you! Photograph: John Carvill/Flickr
Mugging
No, this isn’t when a disgruntled subject sprints off with your camera (though I admit, on a mean city street there is a risk). Mugging is when someone else jumps into the frame. It can be fun to watch people pulling faces and monkeying around, but it rarely makes for an interesting photo. The exception is when the subject and interloper interact and inadvertently make the image work.

It’s all good
It’s all good. Photograph: John Carvill/Flickr
Passing by
City streets are an endlessly interesting subject in their own right. But what looks like a compelling scene when you’re squinting through the viewfinder can sometimes come across a bit flat in the final image. Waiting for someone to walk into the scene can work wonders. Just scope out an interesting background, then wait for a suitable person to come along. It can get a bit frustrating when the perfect subject does come along only to notice you setting up a photo and helpfully walk behind you.

Commute
Commute. Photograph: John Carvill/Flickr
Street photography is rife with ironies and contradictions. The shots wouldn’t exist in any meaningful way without the people in them, yet many of these people might, if asked, opt to remain out of the frame. The key is to empathise with your subjects and treat them as you’d hope to be treated yourself – with kindness and respect. After all, this is a celebration of the streets and the people in them.

The novelist Saul Bellow once described his habit of recharging his creative energies by plunging into the New York subway and immersing himself in the crowd. He called it “taking a humanity bath”. That’s what we do when we take street photographs: we take a long hot bath in humanity. It’s just that we bring a little of the bathwater home with us.